Male nose job: All you need to know

Like any other plastic surgery procedures that women enjoy getting just to improve the way they look, men can now also have the opportunity to enhance their physique using these same cosmetic procedures. Male nose job, for instance, is becoming more and more popular not only in Australia but also in western countries like the US and UK. This is just a testament to how the concept of beauty has evolved over the years.

Male nose job: Is it different from women’s?

Male rhinoplasty is the same nose surgery that women undergo to reshape and improve their nasal profile. The main reason for having male nose job is the same as that of women’s, and that is to achieve an improved facial aesthetic. In addition, men can also resort to rhinoplasty to address common structural defects of the nose that may or may not contribute to certain diseases or disorders, like sleep apnea, deviated septum, and other breathing disorders.

With a male nose job, the surgery can ensure that the nose balances the facial features of the patient including the proportions of the cheeks, chin, and eyes. Rhinoplasty has been advertised to help men (and women) enhance their facial symmetry, develop the shape and size of the nose, minimise the appearance of flaws and bumps on the nose bridge, and manage the nasal tip. 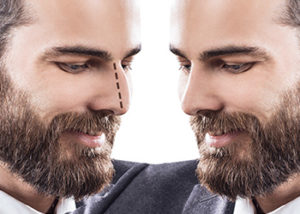 Male nose job: Is it complicated?

Contrary to popular belief that rhinoplasty is a minor and straightforward facial cosmetic surgery, this procedure is a complex operation, and as such, should be performed by an expert. Choosing the ideal plastic surgeon who has the same aesthetic level as you have would effectively reach and satisfy your realistic expectation of how your nose would look like after surgery.

Male nose job: How is a man’s nose different from a woman’s?

Although male rhinoplasty also follows the same techniques and types of rhinoplasty that surgeons perform with women’s rhinoplasty, their primary goal in the reconstructive and aesthetic part of the post-operative results significantly differ. Because women’s beauty includes having smaller noses, men’s nose jobs are geared towards a different direction. Men’s noses commonly feature a prominent, straight bridge and a nasal tip that projects at a 90-degree angle between the nose and upper lip, while women’s have soft curves and a slightly obtuse angle against the upper lip. Men’s nose bridge is projected higher and is wider compared to women’s. Men’s nasal tip is also more projected than women’s.

Male nose job:  Is it different from women’s?

Both rhinoplasty procedures follow the same steps and techniques, but they have different goals. Men often undergo nose job surgery to straighten the nasal bridge and increase the width to the middle of the nose. Comparatively, women often undergo nose job surgery to address a nose that is too wide or a nose that gives the appearance of a droopy tip. Your plastic surgeon should effectively observe the aesthetic or functional problem of your nose so that he can customise a nose job surgery and ensure that the operation would help you achieve a balanced and natural-looking facial appearance.

There are many advantages linked with male rhinoplasty, or women’s, and these include:

Manage functional and structural defects in the nose: Addressing the reconstruction of the nose while solving breathing or sleeping disorders is possible with rhinoplasty.

Better self-confidence: Male nose job can improve the patient’s facial appearance, leading to a boost in his self-esteem, making him free to interact better with other people.

Male nose jobs are becoming highly publicised by many cosmetic clinics as an excellent option to improve men’s looks and masculinity. Although rhinoplasty offers many long-lasting benefits, it is still important for the surgeon to remind his patients of the critical considerations that he must take note of even before undergoing the procedure, like the risks and complications, the recovery period, and the downtime the surgery would entail.